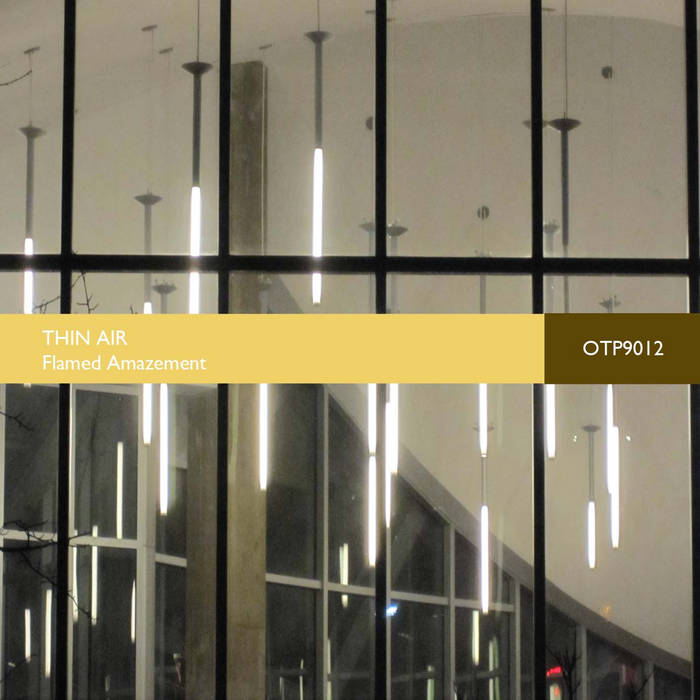 Thin Air is Steve Bowman, mainstay of the Philadelphia electronic music community & half of duo Delicate Monster, whose racks of keyboards make sounds as much in debt to classical music sensibilities as classical synthetic ones, though the end result is hardly what you'd expect. Rippling arpeggios occasionally spill out over curiously alien topographies, expansive washes of sounds folded into suites of charging analog harmonies — think Charles Ives on acid, or Morton Subotnick & Erik Satie as reinterpreted by Edgar Froese.

Bowman's is a music that is somehow maximalist in its minimalism; though there is plenty going on in the lengthier pieces of this album, his intent is to produce large swathes of sound with seemingly very little. This is a misnomer, of course. Particularly on the last track, "Inchmeal", Bowman works out his inner Steve Reich, but this is a Reich of dizzying, swelling proportions—dense, interwoven, postmodern, almost absurdist. But it is a glorious sound.

Flamed Amazement is Bowman's debut on CD, his first true full-length recording after releasing a solo cassette on Chuck van Zyl's Synkronos label way back in the budding 90s and a couple of self-released CDRs with Delicate Monster cohort Art Cohen. No doubt this will be the first of many such legitimate sonic renderings.

All tracks compiled from live performances recorded to 2-track stereo. No sequencers, backing tracks, or multi-tracking used (except on "Gutterball").

Notes on compositions and ideas at www.ThinAirMusic.com. Mastered by Art Cohen at Alpenhof.

Sampa The Great joins the show to discuss her release, "As Above, So Below".